Looking for a kitten?

An Aby or anything else you really need to read the information in the middle box for your own protection and safety.

Heartbroken because you can't find an Abyssinian kitten in Hawaii or the islands?? Well now you can adopt a Fur Child from Osiris (V) for far less than importing from the US mainland.  Email us for information and enrich your life with an Abyssinian Fur Child!!!!

Singapore, New Zealand, Hawaii and all ex-Australia shipments are handled by one of two export shipping companies. Payment is by way of deposits based on actual outgoing costs in processing the kitten/s for export.  As these costs are extraneous to us “all deposits/prepays are non-refundable”.  Your final payment to us will be the actual costs of adopting your kitten/s.  This applies to both exported pet kittens and entire kittens.

Please note…..should you receive an email from a Cody Coffey alleging Osiris (V) Abys has entered into a fraudulent adoption process please feel free to read the following email.  Said email was sent to PayPay who are responsible for this business dealing evaluation.  Further Mr. Coffey has authored threating email to us which are being reported to the local police and the FBI’s Cyber Threats and Fraud Division.

Mr. Cody Coffey approached us in early November 2019 looking to acquire 2 male Abyssinians Tawny in colour specifically from the same litter hoping that they could be delivered to him under 14 weeks of age.

Mr Coffey was informed that exported kittens could not possibly be delivered to him under 14 weeks of age as they require specific vaccinations and inspections at given intervals.  Example was that the kittens must be 8 weeks old for their first set of vaccinations, 12 weeks old for the second vaccination then they must weigh in at 1.1 Kgs before de-sexing can occur plus 10 days post-surgery before they were able to fly.  In addition, their departure from Australia was totally governed by the Australian Quarantine and Inspection Service (AQIS).

Mr. Coffey agreed to all the requirements and was sent two separate invoices for $1000 which were paid via PayPal Nov 17th and Dec 3rd.  As was previously to cover expenses in the processing of the transport of the two kittens. In the meantime, the two kittens were processed for export including:

Each kitten was processed as follows:

On December 7th one of the kittens had to be seen by our vet as it was exhibiting obvious pain for no apparent reason.  It was given pain medication and fluids while the vets attempted to find the underlying cause.  Which was determined to be bowel interception to which the kitten succumbed before and restorative surgery could even be contemplated.

Mr. Coffey was obviously upset at the occurrence being some 6 odd days before actual departure.  We offered to replace the kitten with another male that we had been processing for export in roughly the same time period at no additional cost although all cost expended for the kitten that passed would need to be redone s none were transferrable.

Mr. Coffey elected to select two new kittens from the same litter.  We agree to undertake the additional charges involved as the entire process would need to be re started and all previous funds expended were simply lost as they pertained to two specific kittens and not the new two that were to be processed.  We also offered to expedite the process by using two boys from a separate litter that had already been partially process.  Pictures were sent to Mr. Coffey and his Lady Friend who actually selected the name for the two boys.

Accordingly, we already had the two new kittens given their first vaccinations and first inspections.  We rushed the second vaccination, microchipping and as many other processes as we could prior to final export procedures including a new $500 transport deposit and new NOI’s were submitted. We were waiting on an export date from Qantas Airlines when we received the email from Mr. Coffey that he wished to not go forward.  No specific reason was given and the original conditions were seemingly totally ignored.  We email to advise that the deposits he made had been totally consumed and that at the conclusion of this second processing we would most likely be out of pocket by 800 dollars.

At this point we stopped processing the two kittens for export.  Mr. Coffey as actually sent two (2) email explaining the situation to which he has yet to respond.

A you can imagine we are most unhappy as every process in the exporting is conditioned by the individual kitten and its microchip. Substituting two new kittens is just the same as adding in two new kittens as none all the preliminary expenses were recoupable or transferable as they related directly to a given kitten with a given microchip number.

You are requested to view the Hawaii export information on our web site www.osirisabyssinians.com to substantiate our comments.  In addition we have a total and complete audit trail of the entire communications that have taken place via email and SMS.  Should you require more exact out going costs we will provide.

Understandable there are now further cost that we must entertain for:

Of major concern now is the remaining male kitten for the first agreed pair his current age being past the optimal adoption age of normal kittens and if indeed we will be able to rehome him and recoup some of our losses.

CFA the Cat Fancy America is the largest registration body in the world its 2019 World Wide Awards have just been prsted late June of 2019.

Sammy is the first Queensland Cat and the first Abyssinian to EVER win the above two titles at the Sydney Royal surpassing 357 other cats and kittens in the evaluation process.

Sammy was awarded his title, quite an astounding feat for a four and a half month old kitten as Sammy had to surpass 467 other kittens and cats in the evaluation process to win this coveted award.

Osiris (V) - Breeder of the Year consecutively since 2009 with both the Aby Breeder and the Abyssinian Cat Club of Austrasia.

Hi we're Michael and Sue registered breeders with the Queensland Feline Association. We strictly abide by the QFA Council's Code of Ethics. For information about our Abyssinian cats and kittens, or to provide a forever home for an adult please feel free to email or phone - 0405 1042 60 or 0428 672 256.

They say the Aby originated from Abyssinia (modern Ethiopia), the cat and her descendants naturally acquired the name "Abyssinian", and for many decades the breed was touted as the direct descendants of the sacred cat of ancient Egypt.
.........more >

All our kittens are home raised, constantly under foot and pampered with the best care and tons of love. Handled and gushed over from the day they’re born imprints them with loving, friendly personalities. 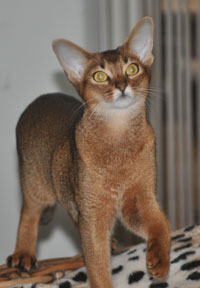 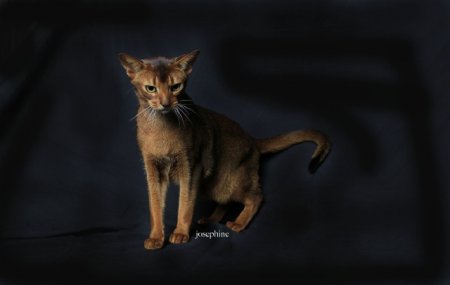 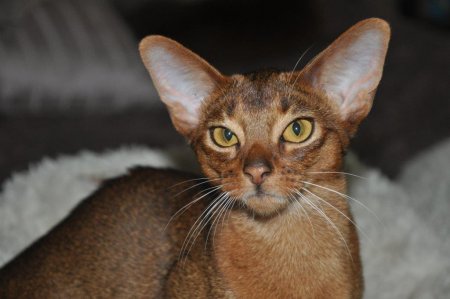